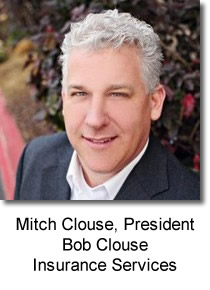 Mitch Clouse began his insurance career when he was still in High School when he went to work for the family agency as a file clerk and mail sorter. He spent the next decade learning all aspects of the personal and farm insurance business.  Mitch left the family agency in 2002 and went to work for another agency. There he learned how to insure businesses and was successful in salvaging a key carrier relationship for the agency.

A few years passed and Mitch was recruited to work for one of the top independent insurance brokerages in the United States. While at this agency, Mitch got over his fear of large numbers.  He was part of team that insured large accounts in the habitational and service industries. Wanting to learn more about other industries, Mitch made his jump to an agency in Roseville. There he was tasked with sales and service of Main Street businesses and later help develop an insurance program for restaurants. While at this agency, Mitch was asked to serve on the board of directors for the Sacramento Chapter of the California Restaurant Association.

A few years passed and Mitch was called back to the family agency where he started. Back at the family agency, he helped develop producers, streamline operations and renegotiated key carrier appointments. Mitch also helped with the transition of ownership when his father decided to retire.

Contact Mitch Clouse today to let him assist you.